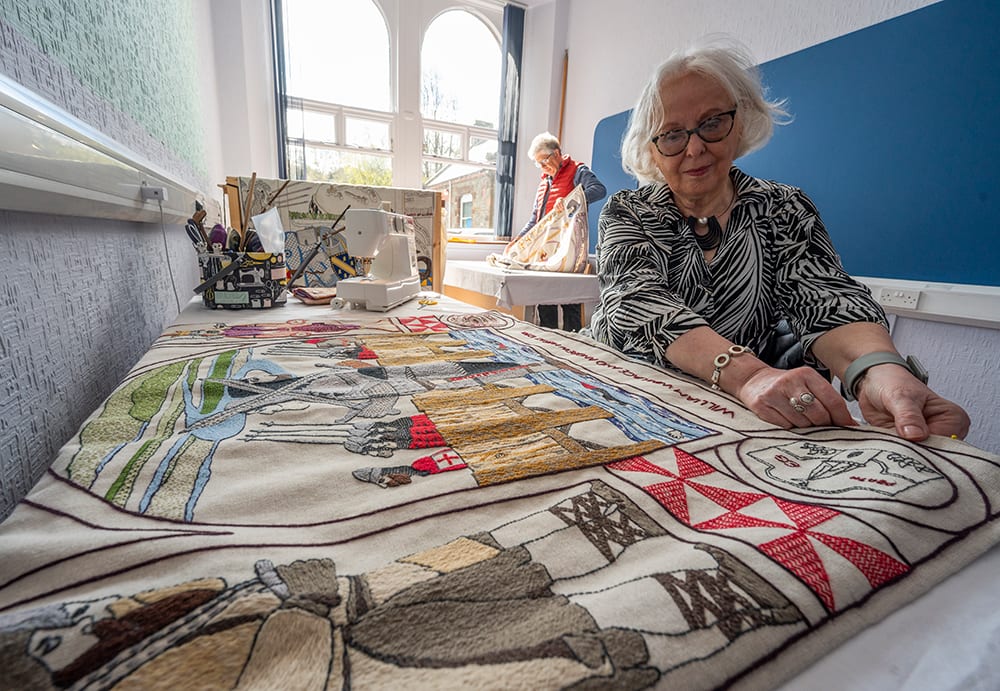 Through the Tapestry and other significant visiting exhibits, the new interactive centre will tell the inspirational true story of Scotland’s history, heritage and culture.

A new visitor attraction housing the globally acclaimed Great Tapestry of Scotland will open in spring 2021 in Scotland’s premier textile region, the Scottish Borders. The £6.7 million purpose built facility and interactive exhibition space will bring the best of Scotland’s world renowned storytelling to life through the Tapestry’s wonderful textile artistry and a range of other significant visiting exhibits.

Created by one of the world’s most prolific and best-loved authors Alexander McCall Smith and narrated by historian Alistair Moffat and artist Andrew Crummy, the Great Tapestry of Scotland tells the inspirational true story of Scotland’s history, heritage and culture (from 8500 BC to present day). It is made up of 160 panels and 300 miles of wool (enough to lay the entire length of Scotland from the Border with England to the tip of the Shetland in the North Atlantic) – making it one of the largest tapestries ever created. The Tapestry is truly the work of the Scottish people, as it was handstitched by thousands of people in communities across Scotland and transported by land, sea and air to come together in the Scottish Borders. It previously toured Scotland to great acclaim from visitors from every corner of the globe.

The project will be led by newly appointed entrepreneur Sandy Maxwell-Forbes, as Centre Director for The Great Tapestry of Scotland. Sandy is part of Live Borders, a charity managing cultural and leisure attractions across the Scottish Borders and operators of this major addition to the Scottish tourism sector. Live Borders is working in partnership with Scottish Borders Council and the Tapestry Trustees to bring this new attraction to fruition.

Speaking on her appointment, Sandy Maxwell-Forbes, Great Tapestry of Scotland Centre Director said: “I’m absolutely delighted to be involved one of the most significant developments for Scottish tourism, heritage and culture in recent years.

“The Great Tapestry of Scotland is a phenomenal achievement – I was a great fan long before I was appointed. Through the intricate and detailed textile artistry by the creative talents of the army of 1,000 stitchers from across Scotland, this truly is the people’s story of Scotland and a triumph of creativity, skill, community and passion. Through the amazing visual story-telling from 8500BC to present day, it makes Scotland’s culture, history and heritage accessible to everyone.”

“We frequently hear from those, who like me, have previously seen the Tapestry and long to come back and see it again, so we are delighted that we will be making it possible with our new permanent interactive space. I have also already started some exciting talks about potential visiting exhibits that will be displayed in the centre, and hope to reveal more about these in 2020.”

One of the Tapestry Trustees, historian Alistair Moffat added: “The Great Tapestry of Scotland is a national treasure and it is wonderful that it will be seen so wonderfully well in its new centre in the Borders – preserving Scotland’s history, heritage and culture for generations to come.

“The Borders is the perfect permanent home for our treasured Tapestry. It has been Scotland’s premier textile region for centuries and is the home of Heriot Watt University’s School of Textile and Design, formerly know as the Scottish College of Textiles. It is also a fantastic place to explore and learn more about the stories captured so beautifully in the Tapestry panels – from sites of historic battles and Abbotsford House, the home of the Scottish novelist Sir Walter Scott, to the region’s fantastic common ridings and some of Scotland’s leading rugby tournaments, like the Melrose 7s. We are truly excited to see the Tapestry reenergise and shine a spotlight on this beautiful area, it’s landscapes, culture, history and heritage, and to continue to inspire Scotland’s future leading textile artists.”

The new Great Tapestry of Scotland building, which is currently being constructed by Scottish contractor Ogilvie Constriction, has been designed by one of Scotland’s leading architectural practices, Page\Park. The contractors will also repurpose the adjacent former Post Office, a B-listed building with exterior carvings by the once world-renowned 19th century sculptor George Paterson Sutherland, who hailed from the town and later emigrated to Toronto. There will also be retail, café, educational and touring exhibition space, as well as an ongoing events and exhibitions programme.

Experts predict that the centre – a short train ride from Edinburgh on the Borders Railway – will attract over 50,000 visitors to Galashiels each year once opened. Almost £900,000 of extra spending per year is predicted for the local economy, providing 12,000 extra visits to complementary attractions.

Scottish Borders Council’s Executive Member for Business and Economic Development, Councillor Mark Rowley said: “The Great Tapestry of Scotland will not only create a national destination visitor attraction and significant community facility in the Borders in 2021, it will also play a key role in the regeneration of Galashiels.”

The Great Tapestry of Scotland visitor attraction is central to plans to regenerate Galashiels, alongside a number of other projects which will provide a host of benefits for the town and the Scottish Borders.

About Sandy Maxwell-Forbes, Centre Director for the Great Tapestry of Scotland

Sandy has a successful background in global technology, oil and gas, business tourism and SME organisations. She has managed diverse teams, has experience in developing and maintaining trusted relationships with shareholders, business partners and internal and external stakeholders, as well as delivering challenging financial and commercial targets.

After a highly successful career in global corporations, Sandy returned to Scotland in 2004 and worked at the Edinburgh International Conference Centre on delivering the £85million expansion project.

The textile industry in the Borders stretches as far back as the 13th century. Visitors can learn more about the Borders textile history at Borders Textile Towerhouse, Hawick. Or by following the Textile Trail – a trail involving ten different textile companies in the Borders, celebrating the wonderful tweed and knitwear industry.